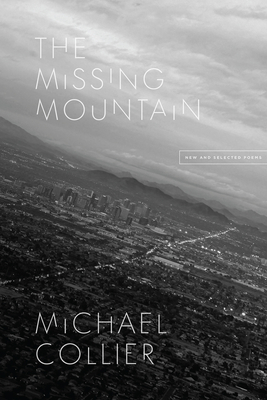 In Stock—Click for Locations
A collection of poetry spanning the career of distinguished poet Michael Collier.

Whether Michael Collier is writing about an airline disaster, a friendship with a disgraced Catholic bishop, his father’s encounter with Charles Lindbergh, Lebanese beekeepers, a mother’s sewing machine, or a piano in the woods, he does so with the syntactic verve, scrupulously observed detail, and a flawless ear that has made him one of America’s most distinguished poets. These poems cross expanses, connecting the fear of missing love and the bliss of holding it, the ways we speak to ourselves and language we use with others, and deep personal grief and shadows of world history.

The Missing Mountain brings together a lifetime of work, chronicling Collier’s long and distinguished career as a poet and teacher. These selections, both of previously published and new poems, chart the development of Collier’s art and the cultivations of his passions and concerns.

Michael Collier is the author of eight collections of poems, including An Individual History, a finalist for the Poet’s Prize, and The Ledge, a finalist for the National Book Critics Circle and the Los Angeles Times Book Prize. He is emeritus professor of English at the University of Maryland and emeritus director of the Middlebury Bread Loaf Writers’ Conferences. He has received numerous honors, including a fellowship from the Guggenheim Foundation and an Award in Literature from the American Academy of Arts and Letters, and he was the poet laureate of the State of Maryland from 2001 to 2004. He currently lives in Vermont.

“Within the arc of this beautiful book, readers will find two sources of wonder: that Collier’s gift for poetry was, from the beginning, complete, and that the poems have also found a way to deepen with each succeeding volume. What becomes of faith when its ceremonies are etched in the heart but its communities begin to falter? What becomes of kindness when its paths are strewn with grief? The quality of attention is everything in these pages: the missing mountain is the one we climb and, climbing, summon into being.”
— Linda Gregerson, author of Prodigal

“In this superb collection, Collier occupies the rarefied air of a particular lineage of American poets running from Frost and Meredith through Strand and Voigt. His work is that unmistakable, profound, and true. To manage such degrees of depth and peril requires a most scrupulous craft; and to wield such classical ironies—engagement met with the threat of effacement, a piercing wit sparking off an even more profound soulfulness—takes a poet of consummate skill, passion, and wisdom. Collier is just such a poet.”
— David Baker, author of Swift: New and Selected Poems

“For over three decades, Collier has explored 'the sparkling circuitry of the universe.' With his telescopic eye, he has traced the delicate contours of the living and the dead so that we might see them more clearly and truly. The result is the exquisite poems of The Missing Mountain come together like a star chart to remind us that we are each one brilliant point in the constellation that we call the story of our lives. One would be hard pressed to find better company than this radiant book.”
— Tomás Q. Morín, author of Machete