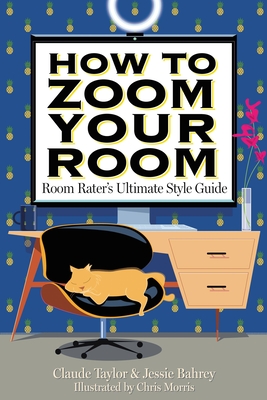 From the virtual office aficionados and Twitter superstars who brought the world the dreaded embarrassment of “cord violations,” comes a fun, informative guide for everyone who now finds themselves having to endure the endless onslaught of digital meetings and calls.

Packed with beautiful how-to illustrations that demonstrate visually stunning set-ups and tips from celebrity zoom rooms, Room Rater packs an amusing punch while offering advice on how to up your game and not be embarrassed by your surroundings. Included in the book are examples from TV host Jonathan Capehart, former Obama advisor Valerie Jarrett, Senator Mazie Hirono, historian Michael Beschloss who takes readers on a tour of historic presidential rooms, and many more.

Chockfull of practical advice that speaks directly to the home office user, the book offers guidance on how to create good lighting, use the perfect camera angle, get rid of clutter, add aesthetically pleasing touches, and avoid appearing as if you are in a hostage video. Whether we like it or not, the remote workplace is here to stay and this book serves as an essential guide to navigating that new normal. It’s a valuable tool for everyone who wants to appear professional, competent, and composed.
Claude Taylor has worked as a professional travel photographer and a political operative. He served on Bill Clinton’s White House staff. From 1998 to 2016 he also worked as a gallery owner. For the last several years he has served as Chair of a political action committee, Mad Dog Pac. He currently resides in Maryland.

Jessie Bahrey has worked in telecommunications and as an editor for a PI company. She currently manages a commercial greenhouse/nursery in Port Moody, BC.

Chris Morris is an award-winning illustrator based just outside Cleveland in Rocky River, Ohio. He has long worked as an editorial illustrator for a number of newspapers and his freelance clients include The New York Times, Boston Globe, Los Angeles Times, LA Magazine, and ESPN among many others. He also teaches as an Adjunct Professor in the Illustration Department of the Columbus College of Art & Design.

“At-home workers looking to spruce up their screen presence would do well to start here.”—Publisher's Weekly