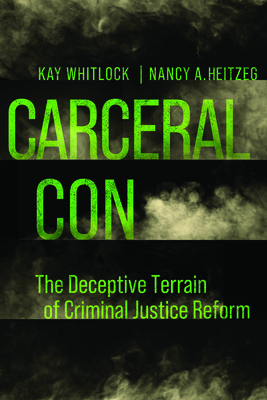 By Kay Whitlock, Nancy A. Heitzeg


In Stock—Click for Locations
A critical examination of how contemporary criminal justice reforms expand rather than shrink structurally violent systems of policing, surveillance, and carceral control in the United States.

Public opposition to the structural racist, gendered, and economic violence that fuels the criminal legal system is reaching a critical mass. Ignited by popular uprisings, protests, and campaigns against state violence, demands for transformational change have escalated. In response, a now deeply entrenched so-called bipartisan industry has staked its claim to the reform terrain. Representing itself as a sensible bridge across bitterly polarized political divides and party lines, the bipartisan reform industry has sought to control the nature and scope of local, state, and federal reforms. Along the way, it creates an expanding web of neoliberal public-private partnerships, with the promotion and implementation of efforts managed by billionaires, public officials, policy factories, foundations, universities, and mega nonprofit organizations. Yet many bipartisan reforms constitute deceptive sleights of hand that not only fail to produce justice but actively reproduce structural racial and economic inequality.

Carceral Con pulls the veil away from the reform public relations machine, providing a riveting overview of the repressive US carceral state and a critical examination of the reform terrain, quagmires, and choices that face us. This book vividly illustrates how contemporary bipartisan reform agendas leave the structural apparatus of mass incarceration intact while widening the net of carceral control and surveillance. Readers are also provided with information and insights useful for examining the likely impacts of reforms today and in the future. What can we learn from reforms of the past? What strategies hold most promise for dismantling structural inequalities, corporate control, and state violence? What approaches will reduce reliance on carceral control and also bring about community safety? Utilizing an abolitionist lens, Carceral Con makes the compelling case for liberatory approaches to envisioning and creating a just society.
Kay Whitlock is a writer/activist focusing on structural violence and inequality. She is coauthor of Queer(In)Justice: The Criminalization of LGBT People in the United States and Considering Hate: Violence, Goodness, and Justice in American Culture and Politics.

Nancy A. Heitzeg is Professor of Sociology at St. Catherine University whose work centers on race, class, gender, and social control with particular attention to the prison-industrial complex. She is author of The School-to-Prison Pipeline: Education, Discipline, and Racialized Double-Standards.