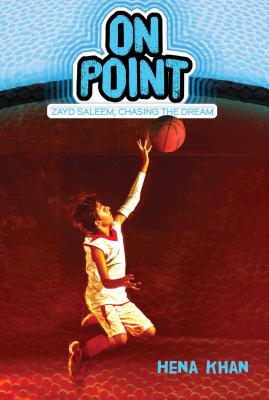 
In Stock—Click for Locations
From the critically acclaimed author of Amina’s Voice comes the second book in an exciting new middle grade series about a scrawny fourth-grader with big dreams of basketball stardom.

Now that Zayd has made the Gold Team, he’s hustling hard and loving every minute of the season.

But when the team starts to struggle, Zayd can’t help wondering if it has something to do with him. Even worse, his best friend Adam suddenly starts acting like he doesn’t care about basketball anymore, even though they are finally teammates. He stops playing basketball with Zayd at recess and starts hanging out with other kids. Then, Adam up and quits the Gold Team to play football instead.

While his uncle’s wedding preparations turn life into a circus at home, Zayd is left on his own to figure things out. He has to decide how to still be friends with Adam and step up to fill the empty shoes he left on the court. Does Zayd have what it takes to be on point and lead his team back to victory?
Hena Khan is a Pakistani American writer. She is the author of the middle grade novels Amina’s Voice, Amina’s Song, and More to the Story and picture books Golden Domes and Silver Lanterns, Under My Hijab, and It’s Ramadan, Curious George, among others. Hena lives in her hometown of Rockville, Maryland, with her family. You can learn more about Hena and her books by visiting her website at HenaKhan.com or connecting with her @HenaKhanBooks.

Sally Wern Comport has illustrated numerous picture books and novels, including Love Will See You Through: Martin Luther King Jr.’s Six Guiding Beliefs (as told by his niece); Brave Margaret: An Irish Adventure; Hanging Off Jefferson’s Nose: Growing Up on Mt. Rushmore; and the Spy Mice series. She has also translated her picture making skills to various large-scale public, private, and institutional artworks. Sally lives with her husband and two daughters in Annapolis, Maryland, where she operates Art at Large Inc. Learn more at ArtAtLargeInc.com.
"With just enough action to keep readers turning the pages and a sprinkle of age-appropriate realizations throughout, this small book is a great pick for elementary-age readers....A delightful follow-up from a writer who understands children, family, and culture."
— Kirkus Reviews

"A great balance between sports action and realistic fiction featuring the everyday life of a boy from a traditional Pakistani
family. Readers will look forward to further adventures featuring Zayd."
— Booklist