I Saw Death Coming: A History of Terror and Survival in the War Against Reconstruction (Hardcover) 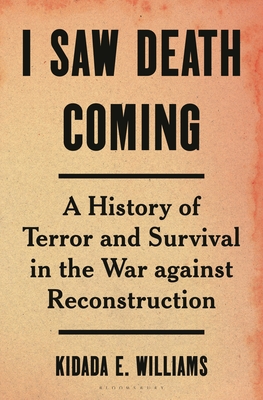 I Saw Death Coming: A History of Terror and Survival in the War Against Reconstruction (Hardcover)

From a groundbreaking scholar, a heart-wrenching reexamination of the struggle for survival in the Reconstruction-era South, and what it cost.

The story of Reconstruction is often told from the perspective of the politicians, generals, and journalists whose accounts claim an outsized place in collective memory. But this pivotal era looked very different to African Americans in the South transitioning from bondage to freedom after 1865. They were besieged by a campaign of white supremacist violence that persisted through the 1880s and beyond. For too long, their lived experiences have been sidelined, impoverishing our understanding of the obstacles post-Civil War Black families faced, their inspiring determination to survive, and the physical and emotional scars they bore because of it.

In I Saw Death Coming, Kidada E. Williams offers a breakthrough account of the much-debated Reconstruction period, transporting readers into the daily existence of formerly enslaved people building hope-filled new lives. Drawing on overlooked sources and bold new readings of the archives, Williams offers a revelatory and, in some cases, minute-by-minute record of nighttime raids and Ku Klux Klan strikes. And she deploys cutting-edge scholarship on trauma to consider how the effects of these attacks would linger for decades--indeed, generations--to come.

For readers of Carol Anderson, Tiya Miles, and Clint Smith, I Saw Death Coming is an indelible and essential book that speaks to some of the most pressing questions of our times.

Kidada E. Williams is Associate Professor of History at Wayne State University. She is the author of They Left Great Marks on Me, coauthor of Charleston Syllabus, and creator of the podcast Seizing Freedom. Williams has been interviewed on NPR's Morning Edition and On Point, and her essays have appeared in the New York Times, Slate, and multiple scholarly journals. She lives in Detroit.

“Powerful and deeply moving ... I Saw Death Coming bears witness to a dark malignancy in American history, one we have never fully excised.” —The Los Angeles Times

“[Williams'] ability to trace select families through the decades truly reveals the lasting negative effect of Reconstruction-era terror on those who had hope snatched away. She reveals the seeds of social racism from the past, which sadly remain firmly planted. A recommended heart-wrenching read that provides significant insight into the historical basis of racial conflict in the United States.” —Library Journal (starred review)

“Altogether timely … A deeply researched work that exposes the shameful legacy of the neo-Confederacy, one that lingers to this day.” —Kirkus Reviews

“Adds depth and nuance to our understanding about what life was like for Black people during this critical period of American history.” —California Review of Books

“In this powerful and haunting account of the war on Black families and communities that followed the Civil War, Kidada Williams shows that she is one of the nation's most essential historians. With painstaking care, she looks unflinchingly at the accounts that survivors and witnesses of racist attacks gave in their own words. The result is a shattering narrative of Reconstruction that attends both to what formerly enslaved people managed to build after emancipation and to all that was taken away from them in the maelstrom of violence that followed.” —W. Caleb McDaniel, Pulitzer Prize-winning author of The Sweet Taste of Liberty

“Writing with both great insight and passion, Kidada E. Williams shows how Black southerners navigated the hardships of their lives in freedom in I Saw Death Coming. Their hope and determination provoked the ire of white supremacists who attacked Black homes and families, launching a second civil war to overthrow Reconstruction. The stories of these men and women who endured tremendous violence, persevered, and gave voice to their experiences will remain with you long after you finish this powerful and heart-wrenching book.” —Megan Kate Nelson, author of The Three-Cornered War and Saving Yellowstone

“In sharing the eloquent testimony, much previously unseen, of the freedmen and -women who lived and struggled through the overthrow of Reconstruction, Kidada Williams has given us a landmark work that will enlarge our understanding of U.S. history.” —Philip Dray, ulitzer Prize finalist, author of At the Hands of Persons Unknown: The Lynching of Black America

“In this fascinating study, Kidada Williams employs superb scholarship to reveal what freedpeople did for themselves and their communities in the wake of the Civil War, just as she exposes the brutal campaign of terror waged by white southerners who sought to reimpose a lost antebellum world. Williams artfully allows her readers to see these struggles through the eyes of those who built schools and churches and forged political campaigns in hopes of transforming their region. A profound work of the utmost importance for anyone who wishes to understand the Reconstruction era.” —Douglas Egerton, author of The Wars of Reconstruction

“Kidada Williams demands that we listen to the Black Americans who, after the Civil War, testified that violent white supremacists derailed their plans for freedom, shattered their families, and left them emotionally traumatized. This book is a powerful act of moral witnessing that invites us to think anew about whose voices and experiences are valued, both in the past and in the present. What we do next is up to us.” —Kate Masur, author of Until Justice Be Done 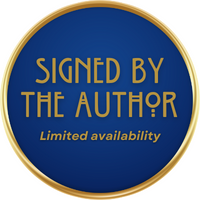