The Strudlhof Steps: The Depth of the Years (Paperback) 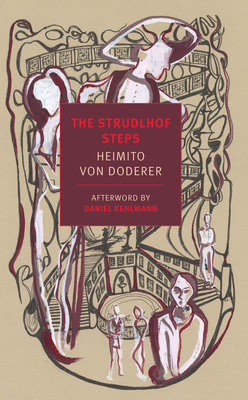 The Strudlhof Steps: The Depth of the Years (Paperback)


On Our Shelves Now at:
The first English translation of an essential Austrian novel about life in early-twentieth-century Vienna, as seen through a wide and varied cast of characters.

The Strudlhof Steps is an unsurpassed portrait of Vienna in the early twentieth century, a vast novel crowded with characters ranging from an elegant, alcoholic Prussian aristocrat to an innocent ingenue to “respectable” shopkeepers and tireless sexual adventurers, bohemians, grifters, and honest working-class folk. The greatest character in the book, however, is Vienna, which Heimito von Doderer renders as distinctly as James Joyce does Dublin or Alfred Döblin does Berlin. Interweaving two time periods, 1908 to 1911 and 1923 to 1925, the novel takes the monumental eponymous outdoor double staircase as a governing metaphor for its characters’ intersecting and diverging fates. The Strudlhof Steps is an experimental tour de force with the suspense and surprise of a soap opera. Here Doderer illuminates the darkness of passing years with the dazzling extravagance that is uniquely his.
Heimito von Doderer (1896–1966), who was born in Vienna, Austria, received the Grand Austrian State Prize for Literature and was nominated for the Nobel Prize in Literature five times. He served in the Austro-Hungarian Army during World War I and began to write during the years he spent as a prisoner of war in Siberia, eventually fleeing and returning to Vienna by foot. His novels The Strudlhof Steps and The Demons brought him international recognition.

Daniel Kehlmann is a novelist, playwright, and screenwriter. His most recent novel, Tyll, was shortlisted for the 2020 International Booker Prize. He lives in New York, NY.

Vincent Kling is a translator and scholar of German literature who teaches at La Salle University in Philadelphia, Pennsylvania. He has translated fiction, poetry, and criticism by Heimito von Doderer, Heimrad Bäcker, Andreas Pittler, Gert Jonke, Gerhard Fritsch, Hugo von Hofmannsthal, and Aglaja Veteranyi. He was awarded the Schlegel-Tieck Prize in 2013 for his translation of Veteranyi’s Why the Child Is Cooking in the Polenta.
"With a contemplative realist prose that registers both the abrasions of nature. . .and its beauties. . ., The Strudlhof Steps moves beyond all-too-human anthropomorphism to paint a cosmic canvas, even as the author holds out the human as the home of what’s worst and best in this world. . . . von Doderer invites us into an endlessly joyous celebration of being itself, drawing out the irradiance of all that simply is." —Joshua Hren, Los Angeles Review of Books

“Doderer is so much better than most other twentieth-century authors—and not only the German-speaking ones—that from the heights of his prose the reader regards many of them with amused bewilderment. He is as zany as Thomas Pynchon, he is an artist of the German language on a par with Thomas Mann, he is a psychologist like Arthur Schnitzler, his gift for metaphor rivals Nabokov’s, and he is, in his own incomparable way, mad.” —Daniel Kehlmann, from the afterword

“[The Strudlhof Steps is an] evocative novel of manners set in the 1920s Vienna of the shattered Habsburg Empire, originally published in 1951 and now translated into English for the first time. . . . von Doderer ably captures a lost world in a book that belongs alongside the works of Stefan Zweig and Karl Kraus. . . . A swirl of complicated characters and plot turns makes this a rewarding if sometimes demanding read.” —Kirkus

“It is no exaggeration to say that Vincent Kling’s translation of . . . The Strudlhof Steps—the first in English—is a monumental achievement. . . [Enter] this world of Viennese melancholy in all its abundance and complexity. . . What the reader stands to gain is a finely wrought sense of a social milieu that has lost the imperial basis of its way of life, but which persists as if that foundation were still there. . . . Vincent Kling’s vivid, graceful recreation of that melancholy aura, and the narrative voice that sustains it, finally makes this modern classic available to us, and makes it worth our time and attention.” —Geoffrey C. Howes, Hopscotch Translation