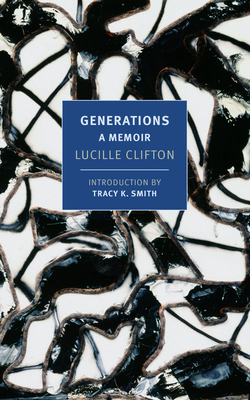 
In Stock—Click for Locations
A moving family biography in which the poet traces her family history back through Jim Crow, the slave trade, and all the way to the women of the Dahomey people in West Africa.

In Generations, Lucille Clifton’s formidable poetic gift emerges in prose, giving us a memoir of stark and profound beauty. Her story focuses on the lives of the Sayles family: Caroline, “born among the Dahomey people in 1822,” who walked north from New Orleans to Virginia in 1830 when she was eight years old; Lucy, the first black woman to be hanged in Virginia; and Gene, born with a withered arm, the son of a carpetbagger and the author’s grandmother.

Clifton tells us about the life of an African American family through slavery and hard times and beyond, the death of her father and grandmother, but also all the life and love and triumph that came before and remains even now.

Generations is a powerful work of determination and affirmation. “I look at my husband,” Clifton writes, “and my children and I feel the Dahomey women gathering in my bones.”
Lucille Clifton (1936–2010) was an American poet known for her work focusing on the African American experience and family life. Winner of the National Book Award and the Ruth Lilly Poetry Prize, Clifton is the only author to have two books of poetry nominated for a Pulitzer Prize in the same year. She is best known for her collections Two-Headed Woman, Next, Good Woman, and Quilting. In addition to her several poetry collections, Clifton also wrote numerous books for children, including her Everett Anderson series.

Tracy K. Smith is a writer and former United States Poet Laureate. The author of a memoir, Ordinary Light, and four poetry collections, including Life on Mars, which won the Pulitzer Prize in 2012, she is a professor of English and African and African American Studies at Harvard University.
“Impressive—honest, clear-eyed with a shapeliness natural to poets. . . . In addition to possessing the ease and intimacy of Clifton’s poetry, Generations speaks to, for, and from fictional and posthumous lives—Moses, Medgar Evers, Amazons, Bob Marley, Sleeping Beauty, etc. She is comfortable and knowing about the dead. . . . Lucille is another word for light, which is the soul of ‘enlightenment.’ And she knew it.” —Toni Morrison

"Of great poets whose poems are kin to Clifton’s, I think of Emily Dickinson; to Dickinson’s intense compression Clifton adds explicit historical consciousness. And of Pablo Neruda: Clifton subtracts hyperbole from his elemental clarity.” —Elizabeth Alexander, The New Yorker

“Lucille Clifton helped me hear things—helps all of those who love her work hear things that they would rather ignore.” —Reginald Dwayne Betts

“[Clifton’s] works are explicitly historical and of a palpable present moment.” —The Paris Review

“You can easily see the reflection of [Clifton’s] tight, spare poetry in this exceedingly compact book, which is all the more affecting for its light touch and suggestive sketches of all the American Sayles, including a few of the white ones.” —Kirkus Review

“[Generations] is a song of self. All the defiant joy of [Lucille Clifton’s] verse is present in this family history, beginning with the ancestor who walked cross-country only to be sold into slavery at age 8. For those whose histories were stolen through violence, this is a proclamation of power and resistance.” —Jessica Ferri, Los Angeles Times
For This Book...
Staff Pick