To buy any of these titles e-mail András Goldinger agoldinger@politics-prose.com or call the store: (202) 364-1919 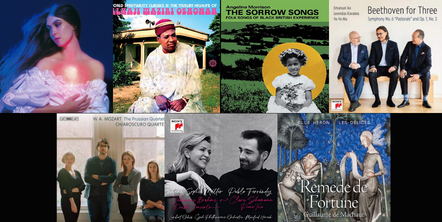 Weyes Blood, AND IN THE DARKNESS, HEARTS AGLOW (Sub Pop, $16.98) – Natalie Mering performs under the name Weyes Blood (a spin on Flannery O’Connor’s Wise Blood); she has a striking alto voice, and she has updated the lush Laurel Canyon sound to our times. And In the Darkness is one of the most sonically and lyrically beautiful albums of the year (especially the gorgeous song, “Grapevine”). Highly recommended.

Alhaji Waziri Oshomah, THE MUSLIM HIGHLIFE OF ALHAJI WAZIRI OSHOMAH: World Spirituality Classics 3 (Luaka Bop, $16.99) – Hailing from the town of Auchi, in Edo State, brings his own style of highlife, praising God and the people of Auchi. From the Pitchfork review: “He crafted his own idiosyncratic style of dance music, emphasizing the region’s mellow palm-wine rhythms over the horn-heavy, big-band highlife that was exported from Ghana to Nigeria by musicians like E.T. Mensah in the 1950s. The horns on “Forgive Them Oh God Amin – Amin’’ are reminiscent of Ebo Taylor, but rather than supplying extra punch to the funk-heavy sound that Taylor pioneered, they provide a counterpoint to unfurling, languorous guitar lines and unhurried rhythms.”

Angeline Morrison, THE SORROW SONGS: Folk Songs of Black British Experience (Topic, $16.99) – Cornwall-based singer Angeline Morrison researched a topic close to her. As she states: “The traditional songs of the UK are rich with storytelling, and you can find songs with examples of almost any kind of situation or person you can think of. But whilst people of the African diaspora have been present in these islands since at least Roman Times, their histories are little known—and they don’t tend to appear in the folk songs of these islands.”

I heard this recording on BBC Radio 3’s Record Review, where host Andrew McGregor picked it as his “Record of the Week,” saying it “peels several layers of vintage varnish” off these quartets, enabling one to listen with “fresh ears.” He praised the playing for its “invigorating energy,” and “soaring lyricism,” reminding us of the connection to Mozart’s operas.

Yo-Yo Ma, Emanuel Ax, Leonidas Kavakos, BEETHOVEN FOR THREE: Symphony No. 6 “Pastorale” & Op. 1, No. 3 (Sony Classical, $16.98) – The second album this year by this trio featuring arrangements of Beethoven symphonies. This time, the “Pastorale” Symphony, arranged by pianist Shai Wosner, is juxtaposed with the Piano Trio in C Minor, Op. 1, No. 3.

The album’s booklet has gorgeous reproductions of the miniatures from the first manuscript of the Remede—prepared c. 1350 under Machaut’s supervision—now in the National Library of France.